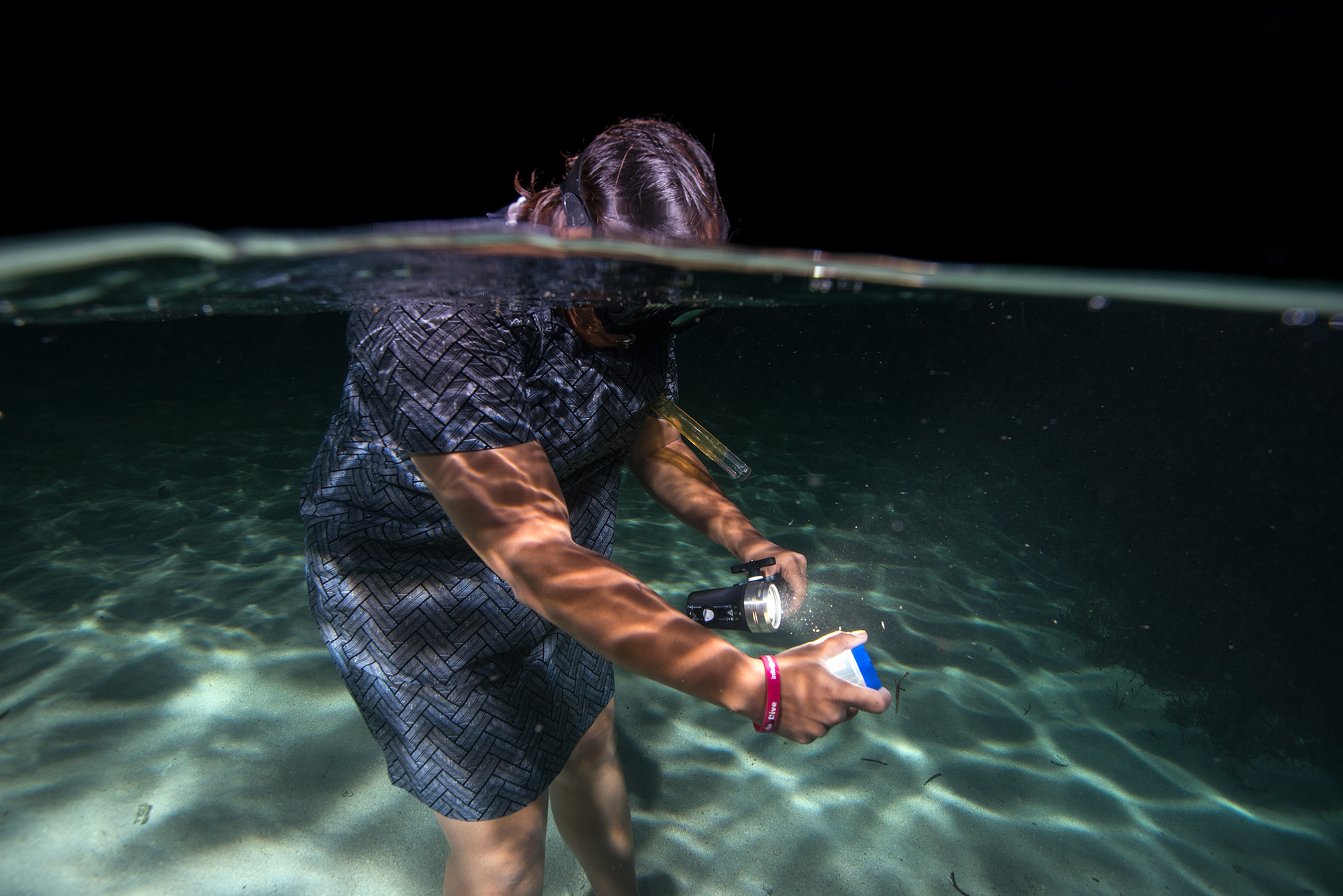 In April 2017, we continued working on Ecosystem Songs on Maafushi Island in the Maldives. This is our third data collection point in the Indian Ocean. Ecosystem Songs is a project in collaboration with  Earth CoLab  and The Indian Sonic Research Organisation. Maafushi is one of Maldives’s locally inhabited islands that opened to tourists in 2010. On the east of the island is a public beach which opens into a lagoon with seagrass meadows. The seagrass meadow is an extremely biodiverse ecosystem and was the primary focus of our study. Juvenile anemone and fish in a niche in seagrass roots We built an underwater microphone to record sounds. The microphone was built from 2 discarded Zoom H2N cardioid microphone capsules that Umashankar Manthravadi gave us. The capsules were mounted on opposite sides of a metal can. To make the microphone waterproof we had to cover the back of the capsules which made them omnidirectional.  The distance in between the two capsules for the two channels was needed as sound travels differently in water than air because of the difference in density. The mic was connected to a zoom H2N recorder to record the sounds. It can also be used with any cell phone with the 3.5mm headphone jack. For recording in deeper water, the Zoom was placed inside waterproof pouches and then secured in a floating styrofoam box. The box had a hole for the mic wire to come out of. Below are recordings from the microphone.

Our sampling sites covered seagrass meadows, reefs and shallow sand-flats. We observed the species diversity from samples of water, sand and seagrass – and documented the structure, occurrence and relationships of life forms that are otherwise invisible to the naked eye. We looked at these samples with the participants of our ‘World As A Classroom’ workshop.  We set up our microscopy lab in one of the classrooms of MaafushiDive. One of the many microscopic invertebrate castings on a blade of seagrass.

A juvenile brown sea anemone; large numbers were found on dead coral rubble in the shallows and fastened on blades of seagrass. The diameter of this individual was approximately 2mm. This minute marine snail that emerged from a sample of algae was no larger than 3mm. Colonies of bryozoans and other epibionts on its shell were revealed on examination under a microscope.

As a part of the workshop, the participants also snorkelled and kayaked with plankton nets tied to their kayaks to study other life forms and interactions in the lagoon. These sessions were led by Umeed and Tasneem. We also tested our prototype for a floating mobile lab.