Exhibition/Workshop/Talks at the Science Gallery in Dublin 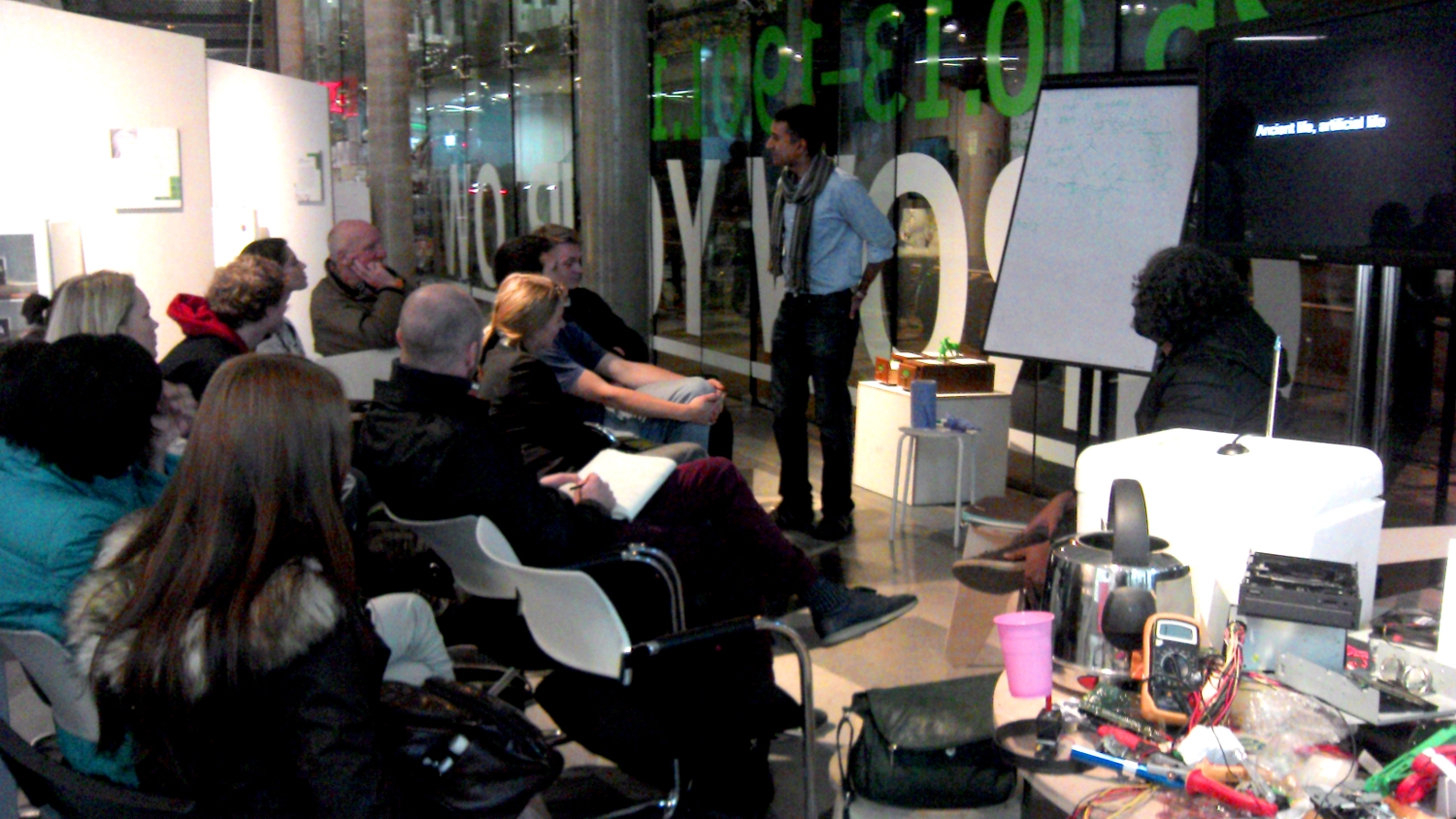 (Art)ScienceBLR as invited to participate in GROW YOUR OWN, at Science Gallery, Dublin. The exhibit was titled ‘Teen Gene Poems’.

Teen Gene Poems is drawn from a collection of work done in India between 2009 and 2013. During this time, these projects have brought together students of Srishti School of Art design and Technology, synthetic biologists, artists, designers, hackers, farmers, environmental activists and even chefs. Together they have created artworks, design artifacts and discursive contexts that investigate critical discourse and politics around synthetic biology, citizen science and bioethics. Part history lesson and part exploration of the intersection between art, science and pedagogy, Teen Gene Poems is primarily concerned with hybrid forms of practice that give an overview of the work done in synthetic biology in a non-western context. It addresses the popular notions and hysteria in the public consciousness and the media about biohacking and points to the diverse, remarkable community of practitioners from around the world that have worked both within and outside institutions to produce these projects.

The first project is Teenage Gene Poems (2009), which harnesses a sequence of DNA called BBa_K221000, one of the first BioBricks produced by artists, that produces an enzyme called geosmin. Geosmin is responsible for the smell of wet earth when it begins to rain. When BBa_k221000 is transformed (injected) into the DNA of E. coli bacteria, it transforms the bacteria into ‘living machines’ that produce the smell of rain. The mystique surrounding the aroma of the Indian monsoon is encoded as a genetic sequence. This is an artistic investigation into the narrative and promises of synthetic biology.

The second project, Synthetic / Post Natural Ecologies (2009, in collaboration with Alexandra Daisy Ginsberg and James King) investigates the consequences of a synthetic ecology, or an ecology in which organisms created in a technoscientific environment interact with organisms in the wild. The soil-living roundworm C. elegans lives on a diet of a variety of bacteria, E. coli being one of them. Genetically modified E. coli are fed to C. elegans, which then express any double stranded RNA of interest. The dsRNA can knock off specific genes, which causes marked visual changes in C. elegans. On a utilitarian level, this project investigates the use of C. elegans as a visual marker for changes in environmental conditions. On a more critical level, the C. elegans here can be used to study the consequences of interactions between engineered organisms and the ‘natural’ world.

The final project, Searching for the Ubiquitous Genetically Engineered Machine (2011, in collaboration with the Center For Genomic Gastronomy), proposes alternate reappropriations of the BioBrick by using existing BioBrick primers as random polymerase chain reaction (PCR) primers in investigating soil samples. This random PCR will provide a succinct signature of the biological diversity present in these samples. These BioBricks may end up in our environment and may very well show up as bands in a gel electrophoresis (a method for separation and analysis of macromolecules) when soil samples are analysed. By imagining a world in which the BioBrick has become the accepted standard for synthetic biology, and where these engineered products are ubiquitous in our lives and environments, the samples we archive will serve as the baseline from which the subsequent extent of human influence can be measured.

Teen Gene Poems was developed by art and design students from the Srishti School of Art, Design and Technology under the guidance of artists, designers and scientists, and within the context of the International Genetically Engineered Machines (iGEM) competition, which is primarily for undergraduate science and engineering students. As an exploration of the poetic promises and perils of synthetic biology, these projects addressed many ethical and philosophical questions. These questions, of course, are not new and relate to the very nature of technology itself. Most remain unanswered, and are still vague and ambiguous.

Mukund Thattai, Yashas Shetty and Shreyasi Kar of (Art)ScienceBLR also participated in the community bio-lab and conducted workshops and talks which interacted with the community at Dublin.