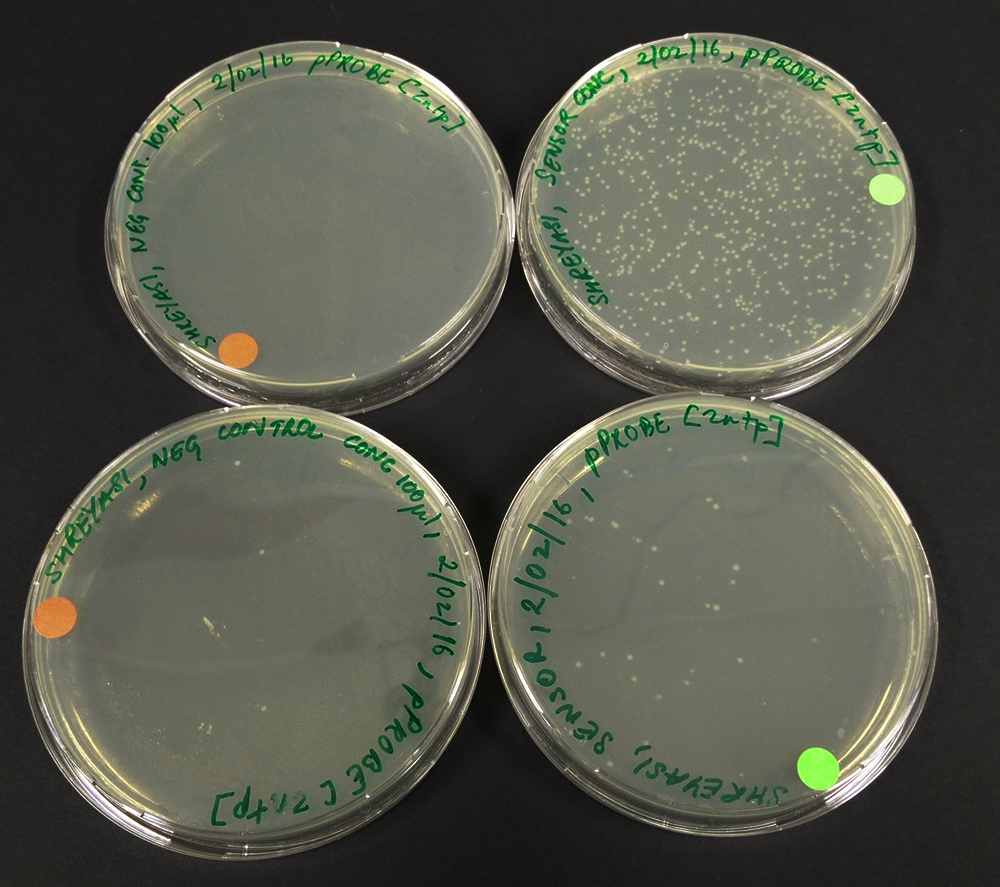 ArtScienceBLR was one of the participants at the Biodesign.cc winter school held on 1-6 February 2016 in Lausanne, CH. Find out more about biodesign here:

We began with science speed dating where we interacted with everyone in the group getting to know a little bit about their background and interests.

Because of the diversity of the group, we worked in pairs – those who were more and less comfortable with molecular biology for the production of the bioreporters with those who were from other backgrounds.

The four bioreporters that we were working with were made for the detection of mercury, arsenic, alkanes and zinc-cadmium. We each chose a bioreporter from these – most people were interested in arsenic and mercury.

Jan explained the basics of the working of the bioreporters and we started off!

We had Siham, Vittali, Yoann, Manuel and Diogo from Jan’s lab helping and guiding us along the way.

Sachiko and Robin explained the working and construction of the DIY fluorometer and we started with making our own devices.

We had the help of David Bonzon (EPFL) and Frederic Truffer (HESSO in Sion) for the soldering and the making of the fluorometer.

For the casing of the fluorometer, we settled on a origami box made from a thick black card paper. For efficiency during the workshop, we got the template laser cut.

We were all successful in making the bioreporter and the DIY device by Wednesday so that we all got to test the reporter + device on Thursday.

We also had several real-world water samples – the 20 samples from India that Shreyasi brought along, water from an incinerator and several people went with Jan to obtain some river and lake water by the UNIL.

The DIY device was compared directly to the 96 plate fluorometric and absorbance readings.

Initial results we obtained confirmed that generally the DIY device worked. There were some improvements to be made for this Winter School v.4.0 of the eGFP detection device.

On top of all of these experiments, we managed to squeeze in an introduction to arduino session,

and visited Hackuarium, where biodesign is housed. The visit also got the participants excited about bio-art and the scope and implementation of biology beyond the lab and in artistic practices.

We also had a session every evening where we heard from different collaborators of the BRAAVOO team. Dr. Shimshon Belkin, Dr. Vivian Lu, Dr. Laura Lechuga and Dr. Auke Ijspeert about their work related to biosensors and its applications in the field.

On the last day we had an open public event where each participant had their own station to share their work. It was very interesting to see how they customised the space to showcase their personal experiences and journey.

Some verbal feedback we received for the workshop:

Two of the water samples from India tested positive for the presence of Arsenic. This is quite alarming and needs to be studied further. The Zinc-Cadmium reporter also gave a signal for the incinerator water. The tests that were done and their results will be up on the biodesign wiki soon.

We also managed to get a group picture with (almost) everyone!